Face the Facts! The U.S. Is Facing a Series of Hurdles – Followed By An Inevitable Cliff!

…The U.S. is destroying itself through senseless (and expensive) warfare and is no longer dancing around the

socialist tar pit—it is now diving in [Obamacare]… It is an empire on the brink of losing its position to the next empire. That much is as clear as day. What we find surprising is that so many Americans cling so desperately to the possibility that a collapse can somehow be avoided and that the U.S. will somehow remain “liveable,” or at least that the present standards will continue. [The truth of the matter is, unfortunately, that the U.S. is facing a series of hurdles, followed by a cliff. Let me explain.]

So says Jeff Thomas (internationalman.com) in edited excerpts from his original article* entitled A Series of Hurdles, Followed by a Cliff.

Thomas goes on to say in further edited excerpts:

A Series of Hurdles, Followed by a Cliff!

When an empire has entered the final, definitive stage of its period of decline, there is always a “hurdle” of some description in front of the citizenry. If only that hurdle can be jumped, the future might be rosy. However, if we step well back from the situation, we see that:

We see a series of hurdles, followed by a cliff. 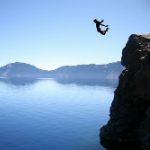 [While]…it is not only the U.S. that is in dramatic decline at present it is, however, the present empire of the world, and just as with previous collapses of empire, when a giant falls, it lands all the harder.

The difficulty in recognizing the cliff beyond the hurdles is, of course, that if all your effort is going into jumping one hurdle after another, it is more difficult to remain objective of the final outcome. It becomes harder to make the decision to quit jumping hurdles and thereby avoid the cliff entirely.

Trouble is, what the average citizen has now will not continue, under the evolving uber-state. Retaining the status quo will not be an option.…

[It is] time for a rethink. As the old saying goes, “The situation is hopeless but not serious.” The world is not coming to an end; it’s merely that, once again, a few countries are in the last throes of decline. The world is still large enough that those who choose to opt for greener pastures outside the declining empire have many choices. Dealing with the hurdles is one thing. Dealing with the cliff is quite another.

(Footnote: For years, we [at Doug Casey’s International Man] have been projecting that, as the US and the EU approach their respective economic Waterloos, they will impose increasing controls on their people—laws that will serve to pen in the sheep as much as possible, so that when the odiferous effluvium really does hit the fan, the average citizen will find that the gate has been shut and his ability to internationalise has become, at best, extremely difficult, and maybe impossible.

For those of us who are not a part of the US or the EU, it would seem a simple exercise to simply stand back and view all countries as possibilities for residence, employment, investment, banking, citizenship, etc. After all, when seeking to buy a home, no one, in any country, assumes that the only possible choice he has is his present residence. He gets out the newspaper, goes on the Internet, checks with realtors—all in the interest of finding the property that is most suitable to him.

It would therefore seem logical that the choice of country (for whatever purpose—not merely for residence) would be approached in the same way, yet this is rarely the case.

1. U.S. Can’t Escape the Mess It’s In Without a Complete Economic Collapse! Here’s Why

The last several decades of governmental economic policy has seen wealth destruction. Such policies are analogous to the government heating its home by burning the furniture. Burning furniture might get you through a few winters, but unless it is replaced eventually there is nowhere to sit and no fuel for next winter. Fortunately our ancestors were industrious and frugal, creating a lot of furniture. We stayed warm for a long time as a result, but the furniture is disappearing. Words: 970 Read More »

2. Brace for Impact: U.S. About to Go Off a Financial Cliff!

The kind of impact [our economy is] going to have will not be like flying into the side of a mountain. It will be the kind of crash that skids over land, clipping trees and buildings until the plane ends up wingless in a smoldering heap. I just hope the fuel tanks don’t ignite when the long rough ride is over. [Let me explain.] Words: 832 Read More »

3. Economic Collapse Is a Distinct Possibility – Are You Prepared (even a little bit)?

Do you share concerns about the world today, and the path we are headed on? Do you believe a total economic collapse is a real risk? Many would say it’s a concern but doubt it’s actually going to happen. It’s always been okay, so it probably always will be, is certainly the view that most of us hold. The thing is, though, that it hasn’t always been ok and it could easily happen again. Are you prepared for such an eventuality? Read More »

These 5 red flags will give you anywhere from a few days to a few months of warning that things are about to change drastically…and well before those around you grasp the full extent of what is going on. This is hopefully a scenario that never happens as this will truly be the end of the world as you knew it. Read More »

5.  Another Crisis Is Coming & It May Be Imminent – Here’s Why

Is there going to be another crisis? Of course there is. The liberalised global financial system remains intact and unregulated, if a little battered…The question therefore becomes one of timing: when will the next crash happen? To that I offer the tentative answer: it may be imminent…[This article puts forth my explanation as to why that will likely be the case.] Read More »

6. What Wll Happen In Coming Collapse? How Will Governments Try to Fix Things?

Most people deal in the present, rarely questioning the future beyond what they consider to be the very next event. The great majority of people…cannot imagine…a disastrous collapse as being in any way possible because surely, somehow, the governments of the world will fix things. The number of people whose eyes have been opened seems to be growing, however, and many of them are asking what the collapse will look like as it unfolds. What will the symptoms be? Here is how we see it. Read More »

7. I Repeat: “Economic disaster of unprecedented scale is coming!” Here’s Why

I get tired of preaching economic disaster and I am sure readers are just as tired of reading about it. Yet, it is coming regardless. The disaster will be of such importance that one cannot overemphasize it or warn too often about it. It will be a disaster of unprecedented scale. Read More »

8. The Collapse of the U.S. Dollar is Unavoidable! Here’s Why

The mother of all collapses is still in front of us. Below are my reasons why that is the case and how to protect yourself financially from such an eventuality. Read More »

9. The 5 Stages of Economic Collapse: Financial, Commercial, Political, Social & Cultural – Where is the U.S. Now?

Having given a lot of thought to both the differences and the similarities between Russia and the U.S. – the one that has collapsed already, and the one that is collapsing as I write this – I feel ready…to define five stages of collapse to serve as mental milestones as we gauge our own collapse-preparedness and see what can be done to improve it. Words: 2500 Read More »

10. How the Ongoing U.S. Economic Collapse Compares to the U.S.S.R. Experience (Dmitry Orlov)

Dmitry Orlov’s repeated travels to Russia throughout the early nineties allowed him to observe the aftermath of the Soviet collapse first-hand. Being both a Russian and an American, Dmitry was able to appreciate both the differences and the similarities between the two superpowers. Eventually he came to the conclusion that the United States is going the way of the Soviet Union and has concluded that when the U.S. economy collapses, it is bound to be much worse – and permanent – because the factors that allowed Russia and the other former Soviet republics to recover are not present here. Words: 3730; Slides: 28 Read More »

11. Don’t Ignore the Coming Financial Storm – It IS Coming and Here’s How to Get Prepared

Many people refer to me as a “doom and gloomer” because I run a website called “The Economic Collapse”. [Just because] I am constantly pointing out that the entire world is heading for a complete and total financial nightmare, [however,] I don’t think that it does any good to stick your head in the sand. I believe that there is hope in understanding what is happening and I believe that there is hope in getting prepared. [This article does just that.] Words: 2432 Read More »

12. Monty Pelerin: Economic Collapse Coming to U.S. & Other Industrialized Nations of the World! Here’s Why

Those dependent on the welfare state are unaware that their benefits are not sustainable. Most believe tomorrow will be like today and the checks will keep coming from Mother Government. Political power was gained based on promising these benefits. No politician will risk his position by trying to reduce them. No democratic society has ever rolled them back via peaceful political means. [At worst,] the economy and society could end up in ashes [and, at best,] the world is in for a long period of stagnation, retrogression and conflict. [Let me explain more fully.] Words: 1115 Read More »

The level of debt has surpassed the possibilities of being serviced. Mathematically, the debt problem cannot be solved, regardless of economic policies. That, unfortunately, is written. For it to be serviceable would be to violate the laws of mathematics and that cannot happen. [As such, America is quickly approaching a catastrophic economic collapse. As repelling as that sounds, it’s in your own best interest to learn just how bad the situation is. This article is an attempt to do just that.] Words: 310 Read More »

14. Why The Government and The Economy Will Collapse

The problems of the US government are insoluble. They will result in the sovereign default of the federal government and the collapse of the US economy. Monty Pelerin explains why: “The claimed debt of the Federal Government of $16 Trillion is enough to threaten its viability and that of the US economy. The current glide path of spending and revenues ensures that debt will increase. Explicit and implicit Treasury guarantees will be required to bail out failing public and private agencies. The situation becomes hopeless when the unfunded liabilities are taken into account.” Read More »

Share
Previous “Golden Cross” Suggests MUCH HIGHER Prices Coming for Gold, Silver & PM Equities
Next Financial Warfare: U.S. Would Be the Big Loser In Any Economic Confrontation With Russia – Here’s Why (2K Views)