D-Day is Coming: A Financial Crisis is Brewing in France – Here's Why

Lorimer Wilson May 1, 2012 Comments Off on D-Day is Coming: A Financial Crisis is Brewing in France – Here's Why 2,215 Views

“The real risk for the euro zone now is not Greece, but France,” says a top

French finance boss. Nicolas Baverez, a commentator who foresaw the country’s looming debt problems in a bestselling book of 2003, agrees: “I’m convinced that France will be the centre of the next shock in the euro zone.” [below their views are substantiated with some alarming and disturbing facts about France;s financial situation and how their politicians are failing to address the brewing crisis.] Words: 740

So reports an article* in the Economist (www.economist.com) which Lorimer Wilson, editor of www.munKNEE.com (Your Key to Making Money!), has edited below for length and clarity – see Editor’s Note at the bottom of the page. This paragraph must be included in any article re-posting to avoid copyright infringement.

“The awkward truth is that France, the second-biggest economy in the euro zone after Germany, faces a public-finance squeeze. French public spending now accounts for 56% of GDP (see chart 1 below), compared with an OECD average of 43.3%: higher even than in Sweden. For years France has offered its people a Swedish-style social model of services, benefits and protection, but has failed to create enough wealth to pay for it. 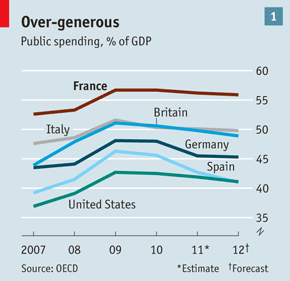 Today France continues to behave as if it enjoyed Sweden’s or Germany’s public finances, when in truth they are closer to those of Spain.

Although France and Germany have comparable public-debt levels, at over 80% of GDP, Germany’s is now inching downwards whereas France’s is at 90% and rising…. The country’s auditor…has warned that unless “difficult decisions” are taken this year and next on spending, public debt could reach 100% by 2015 or 2016. 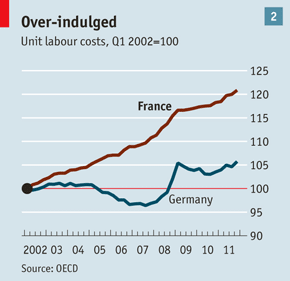 The underlying problem is that, over the past ten years, France has lost competitiveness.

This erosion of French competitiveness raises hard questions about the underlying social compact. Frenchmen cherish the notion that everyone has an equal right to decent services in good times and a generous safety net in bad but:

Put simply, France is about to face the tough choices that Gerhard Schröder, Germany’s former chancellor, confronted in the early 2000s or that Sweden did in the mid-1990s, when its own unsustainable social system collapsed. The euro-zone crisis, which has made bond markets unsparing of slack economic management, means that these decisions have become both more urgent and more difficult.

Automatic Delivery Available! If you enjoy this site and would like every article sent to you automatically then go HERE and sign up to receive FREE Your Daily Intelligence Report. We provide an easy “unsubscribe” feature should you decide to opt out at any time.

The candidates, however, are masterfully managing to duck all this….Although both Nicolas Sarkozy, the Gaullist incumbent, and François Hollande, his Socialist rival, have embraced deficit reduction, each vowing to bring France’s budget deficit down to 3% of GDP next year, neither is promising to do so by making radical spending cuts. Both presidential front-runners instead rely heavily on balancing the books through tax increases.

Mr Sarkozy has already raised corporate and income tax and now says he wants to:

How can France be holding an election that so signally fails to confront the right questions? What are the chances that any of the candidates, if elected, is ready to face up to the shock that is to come?”

*http://www.economist.com/node/21551461  (To access the articles please copy the URL and paste it into your browser.)

1. Campbell Asks: Can Italy Be Far Behind Spain?

About three months ago, shortly before Greece’s sovereign debt was restructured, I began to warn about Spain as the next Eurozone country to focus on. That has, indeed, turned out to be ‘all the news’ with reports every day on Spain’s deteriorating financial condition. Given the ongoing world economic uncertainty and volatility, however, I suggest you now begin to pay very careful attention to Italy going forward, but doing so without losing sight of what is transpiring in Spain. [Let me explain why I see ‘Italy’ eventually surpassing Spain as ‘all the news’.] Words: 485

It was just 6 months ago that Spain enjoyed a credit rating of AA. In early October, 2011, S&P downgraded Spain to an AA- rating with a negative outlook (details below as to why) and then again in January, 2012 from AA- to A for failing to make much in the way of improvements. Then, just last week, having clearly forewarned Spain that it was at risk of having it’s credit rating even further downgraded with all the financial implications of such a move, S&P further reduced Spain’s credit rating by two levels to BBB+. When you read what S&P said back in October and again in January, Spain has only itself to blame for its amazing mismanagement and sorry state of affairs. Words: 2000

3. The Coming Crisis in Europe Will Result in a MAJOR CRISIS in the U.S.! Here’s Why

5. Where Is This Unprecedented Global Financial Crisis Headed? A Retrospective from Alf Field

Everyone must be wondering where this “unprecedented global financial crisis”, (the World Bank’s words), is heading. What follows, for what they are worth, are my cogitations on this crisis. Words: 1641
6. This Picture of European Economic Reality is Worth 26,911 Words – Take a Look

7. IMF’s Attempt to Use Spain’s Financial Woes to Increase Its Powers a Momentous Move – Here’s Why

The International Monetary Fund wants the rules of the IMF changed so it can lend directly to banks and underwrite a rescue of the Spanish financial system without increasing Spain’s government debt. If the IMF is permitted to do so, however, the banking system’s control would pass to the IMF and such an increase in powers would be momentous. Here’s why. Words: 755