COVID-19 Is Largest Shock To Global Economy In +100 Years

@$$4$The World Bank’s latest World Development Report emphasizes that the COVID-19 pandemic was a truly global economic shock, in the sense that a greater share of countries around the world were affected than in previous economic cataclysms.

This article is sponsored by Jane Gibson. Go HERE to sponsor your own.

The authors write: “Economic activity contracted in 2020 in about 90% of countries, exceeding the number of countries seeing such declines during two world wars, the Great Depression of the 1930s, the emerging economy debt crises of the 1980s, and the 2007–09 global financial crisis (figure O.1). In 2020, the first year of the COVID-19 pandemic, the global economy shrank by approximately 3%, and global poverty increased for the first time in a generation.”

The challenge for policymakers around the world was to provide sufficient assistance to help households and firms over the worst of the pandemic, but at the same time not to pile up so much debt as to create dramatic future problems, saying: “In 2020,

The common pattern around the world was that governments of high-income countries were able to borrow more easily and thus to spend as a share of GDP during the pandemic. 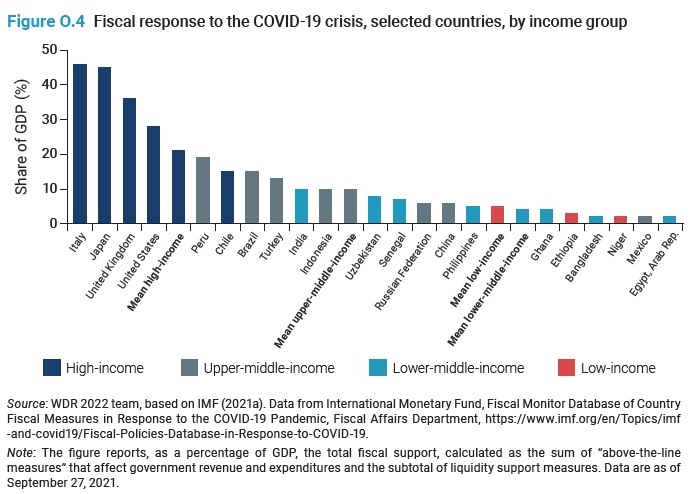 The World Bank of course focuses on issues of lower- and middle-income countries. Although the governments of these countries on average mostly did not take on large amounts of extra debt, many of them pushed the limits of what they were able to borrow. In addition, their financial systems nonetheless face the substantial challenge of firms and households that are unable to repay their loans or pay their bills.

The above version of the original post by Timothy Taylor (conversableeconomist.com) was edited [ ] and abridged (…) to provide you with a faster and easier read. Also note that this complete paragraph must be included in any re-posting to avoid copyright infringement.

Sponsor an article for $10; Receive a 258-page book as a thank you. Click here