reached. Currently the Gold Miners Bullish Percent Index has dropped to 7.14% – an extreme reading, one rarely ever seen, and not since the panic drop in March of 2009. Following that signal, GDX rallied for the next 2½ years increasing over 4 times in value. As such, a move up in the Gold Miners Bullish Percent Index from these historically low levels could signal another major move in gold mining stocks….[Let me explain further.] Words: 1078

So says Christopher Wallace in an article* originally posted on Seeking Alpha.

Wallace goes on to say, in part:

In this article I will review the evidence about the gold miners which points to bearish extremes and therefore the probability of a sizeable near term rally.

The contrarian school of investing attempts to profit by taking the opposite point of view of the prevailing conventional wisdom. Contrarians eschew the current fads and instead seek the investment road not taken. Contrarians are fond of expressing themselves with phrases such as:

Contrarian investing is really a form of value investing. When an investment is extremely out of favor, its price is not bid up, it is beaten down. That is where the bargains can be found. Stocks in March of 2009 certainly fit the bill and went on a major bullish run from there. Conversely, tech stocks in 2000 were wildly popular, and internet stocks in particular were so in vogue that they were bid up to massive valuations which ultimately came crashing down.

Investing is not easy; if it were, the majority of investors would be rich. I think Sir John Templeton defined the link between contrarian investing and value investing best: “Investors should remember that events they can foresee aren’t likely to have much effect on the overall market. That’s because other investors can also foresee these events, and stock prices reflect them before anyone can take advantage of the situation (discounting). The things that can cause a major change in the stock market’s direction are almost always unexpected.”

Being contrary just for the sake of being contrary is not wise. Investors as a whole are not stupid, and that is not the basis of contrarian investing. Its basis lies in the tendency of human nature to pile on and take things to extremes. Extremes by definition are anomalies; they are statistical outliers, crying to revert to the mean. The real profit comes from recognizing when a trade has become over-crowded, when too many people have moved to one side of the boat and to stay there risks tipping it over. Trends, even those that appear irrational, can and often do go on for longer than most of us would think. As Lord Keynes said, “The market can remain irrational longer than you can remain solvent”. The corollary to that is it cannot remain so forever. The value is created in recognizing the untenable extremes, the ones that must change.

Gold Mining Stocks Appear to Be At A Bearish Extreme

It pays for investors to search for stocks that are not just out of favor, but those that are extremely out of favor. I believe that gold stocks have hit such an extreme and are therefore likely to reverse direction and move up. The result of extreme negative sentiment is usually extreme value which frequently leads to above average gains.

Mark Hulbert publishes an investment letter, The Hulbert Financial Digest, which has tracked over 160 investment newsletters since 1980. In doing this he has put himself in an excellent position to get his thumb on the pulse of what the investment community is thinking and to identify extremes. Mark recently published an article stating that:

The average Hulbert Gold Newsletter Sentiment Index (HGNSI) reading over the last four months is minus 3.3%. You have to go back as far as 1991 to find another four-month period in which the average HGNSI reading was this negative. Gold at that time was trading around $360 per ounce – or around $1,200 an ounce lower than where it stands today.

This negative sentiment is shown very clearly in the one year comparison chart of the two major gold ETFs, GLD which represents physical gold or bullion and GDX which is an unmanaged, diversified fund of senior North American gold producers…

Following the link to the chart you will see that physical gold itself as represented by GLD is flat for the last year while the gold miners as represented by GDX have lost 30%. Such a wide disconnect can be considered an extreme. Following this link to Stockcharts.com shows how the present ratio of GDX to GLD has never been lower since the 2009 crash.

There are other contrarian indicators that can be found as well. But the single most compelling of them has to be the Gold Miners Bullish Percent Index. The Bullish Percent Index was developed by Abe Cohen in the mid-1950’s and originally applied to all NYSE stocks. It determines the number of stocks exhibiting bullish point and figure chart patterns and compares them to the total number in the group. Readings can range from 0% to 100%, and the “normal” range is between 30% and 70%. Numbers outside that normal range indicate excessive bearishness or excessive bullishness. The way to use the indicator is to find an extreme reading and once it reverses, follow its signal. It’s recent track record with the gold miners has been impressive. 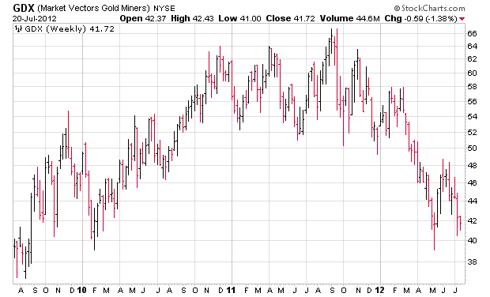 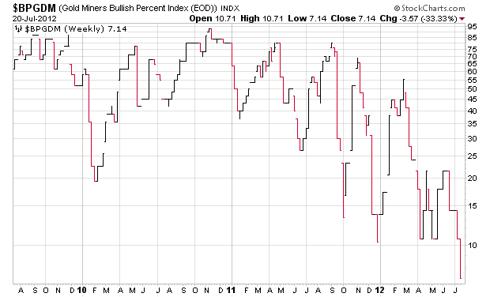 The charts above show that each time the Gold Miners Bullish Index dropped below 30 and then reversed back up a tradeable rally in GDX ensued.

What is particularly interesting is that now the Gold Miners Bullish Percent Index has dropped to 7.14% – an extreme reading, one rarely ever seen, and not since the panic drop in March of 2009. Following that signal, GDX rallied for the next 2½ years increasing over 4 times in value.

A move up in the Gold Miners Bullish Percent Index from these historically low levels could signal another major move in gold mining stocks….

*http://seekingalpha.com/article/738271-buy-signal-pessimism-among-gold-miners-hits-extreme (To access the above article please copy the URL and paste it into your browser.)

1.We Don’t Think Gold & Silver Mining Stocks Are Worth Buying Now – Here’s Why

For the last 10 months or so we have watched the precious metals mining sector try in vain to put in a decent rally only to run out of steam and disappoint some of its most ardent supporters – including us. Stock prices have tumbled and now present us with cheaper entry levels. Are they worth buying now? We don’t think so. Here’s why we still hold that view. Words: 415

All the fundamental factors that have made gold such a stellar investment for the last decade are still intact…[but] there are several things that have been affecting gold negatively over the past few months, much to our dismay. Words: 367

3. Martin Armstrong: Flight-to-Quality is NOT Over – Yet! Gold is NOT Ready for Prime Time – Yet! Here’s Why

Martin Armstrong provides a remarkable explanation of what is going on right now with the U.S. dollar, bond yields and the current price of gold. It would be well worth your time to read and reflect on what he has to say. Words: 822

5. The Gold Bubble Is About to Burst and the Upcoming Drop Could Be Severely Sharp! Here’s Why

The gold bubble is about to burst…the decisive move is coming within weeks! Selling has been heavy, key technical levels have been broken, important moving averages have been violated, and momentum is building to the downside. The upcoming drop could be severely sharp. [Let me explain why that is the case.] Words: 1239

6. I Love Gold but I’ve Turned Bearish! Here’s Why

I love gold but I’ve turned bearish. [While I admit] if the Greeks were to quit the euro that gold could face a short-term bull wave I believe gold’s fundamentals are [too] weak to support the current price. [Here are 8 solid reasons why.] Words: 685

15. We Are Certain Gold Producers Will Soar – Here’s Why

For the past eighteen months, gold stocks have been pummeled…What’s going to move these darn stocks? Will their day ever come? Could our research – gulp – be wrong? Jokes have even started circulating…[such as] a) What’s the difference between a seagull and a gold stock investor? The seagull can still make a deposit on a Mercedes. b) Gold equities may be bad, but I slept like a baby last night. I woke up every hour and cried. Laugh or cry, however, underneath this heap of stock-certificate debris is the contrarian opportunity of a lifetime. That’s a strong statement, I know, but below I present numerous well-researched reasons why I’m convinced gold stocks are one spark away from igniting the portfolios of those with the cash to buy, courage to act, and patience to hold. Words: 2800