It’s pandering season again, with politicians and journalists wringing their

hands about how cutting taxes will be a windfall to the rich and result in higher deficits. The truth, however, is that by NOT cutting taxes the federal government is losing money and the economy is suffering from sluggish growth. Cutting taxes would almost surely result in a significant boost in revenues and stronger growth.

This version of the original article by Scott Grannis has been edited ([ ]) and revised (…) to ensure a faster & easier read. It may be re-posted as long as it includes a hyperlink back to this revised version to avoid copyright infringement.

How do I know this? [Well,] since…February 2016…revenues from corporate and individual income taxes have flat-lined, despite the fact that:

It’s amazing: rising incomes, rising profits, and soaring asset prices have resulted in no increase in revenues to the federal government, even though tax rates weren’t cut. How could that possibly happen? Simple: people are rational, and they respond to incentives. Given the incentive that tax rates may be reduced in the future, individuals and corporations have apparently taken steps to reduce their current tax liabilities by:

Here are some charts which fill out the story:

The chart below shows the rolling 12-month totals of federal spending and federal revenues. 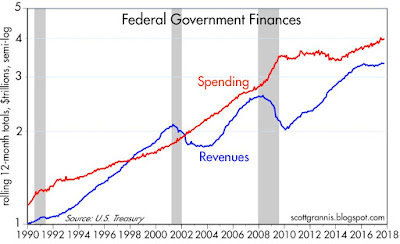 The chart below shows the major sources of federal revenues… 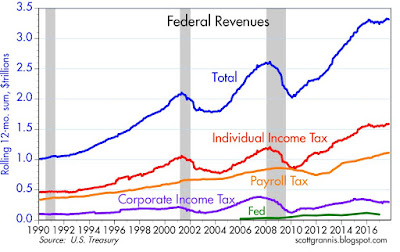 As the chart below shows, the rolling 12-month federal budget deficit has increased…relative to GDP, from 2.4% to 3.4% – and it’s ALL due to zero growth in tax receipts, which occurred despite no reduction in tax rates and sizable increases in incomes and capital gains. 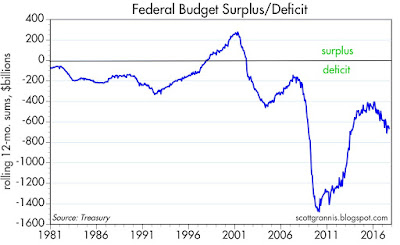 It’s only reasonable to conclude that the reason federal revenues have failed to materialize as would have been expected is that people and corporations have taken meaningful steps to postpone income, accelerate deductions, and postpone the realization of capital gains – and they have done all that because they have been thinking there was a decent chance of significant tax reform.

It’s a safe bet that if the tax code is reformed, and marginal tax rates on incomes, capital gains, and corporate profits are reduced, Treasury will see an almost immediate surge in revenue. Tax reform would:

But won’t the rich get the bulk of the benefit from lower tax rates? Sure…but when the rich keep more of their hard-earned money, they almost certainly will invest most or all of it, and that’s what creates jobs and prosperity…
Congress needs to cut taxes in order to boost revenues and stimulate the economy. Quickly! We can’t afford to wait.