Coming Bear Market Will Be the Worst Since the Great Depression!

With the S&P 500 at all-time highs and seemingly endless “free liquidity” being provided by the Fed, the last thing most investors can envision right now is a major bear market or recession — particularly ones that will be the worst since the Great Depression of the 1930s – but the facts we will detail in this article show that is highly likely to be the case!

Below are the five key reasons:

Virtually every major financial asset is overvalued and priced to deliver low – or even negative – long-term returns.

The Shiller P/E Ratio shown below is 30% higher than it was at the 1929 peak and is nearly as high as the all-time high in 2000. It is calculated as the price of the S&P 500 divided by the average past 10 years of earnings, adjusted for inflation in an attempt to smooth the cyclicality of earnings. Historically, high Shiller P/E Ratios have led to below-average long-term returns. 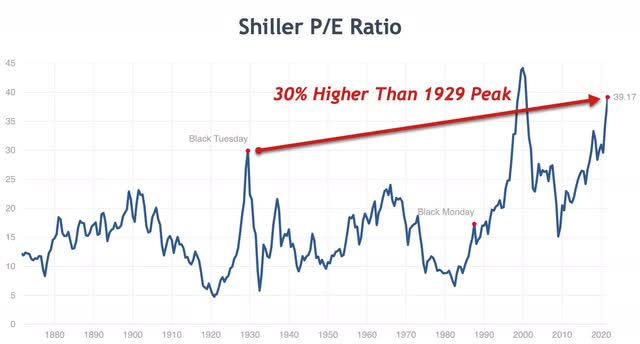 Warren Buffett’s favorite valuation measure – and the one that best predicts future long-term stock market returns – is the Stock Market Capitalization-to-GDP Ratio, which is shown below. Based on this measure, stocks are trading 30% higher than the prior all-time high at the Tech Bubble peak of 2000! Stocks would have to fall over 60% for this ratio to return to the levels it reached at the stock market bottom in March 2009.

Real estate is also expensive, with REITs trading at historically low dividend yields and, as shown in the chart below of the S&P/Case-Shiller 20-City Home Price Index, home prices are currently 27% higher than they were at the housing bubble peak of 2006!

…When investors are very bullish, that is a bearish contrarian indicator…and an excellent sentiment indicator is the Equity Put/Call Ratio.

The chart below shows the Equity Put/Call Ratio, using the 100-day moving average to reduce short-term noise in this indicator. Over the past year, it has fallen to extremely low levels – well below those seen at the stock market peak in 2007. 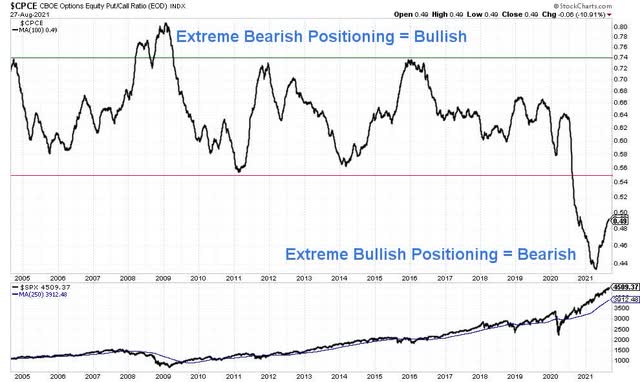 The next chart is the Rydex Asset Ratio which is the ratio of investor assets in all Rydex bear and money market funds (bearish positioning) compared to investor assets in all Rydex bull funds (bullish positioning). As you can see, investors have been very bullishly positioned in U.S. stocks for over seven years! The last time investors approached this level of bullishness was around the Tech Bubble peak of 2000. 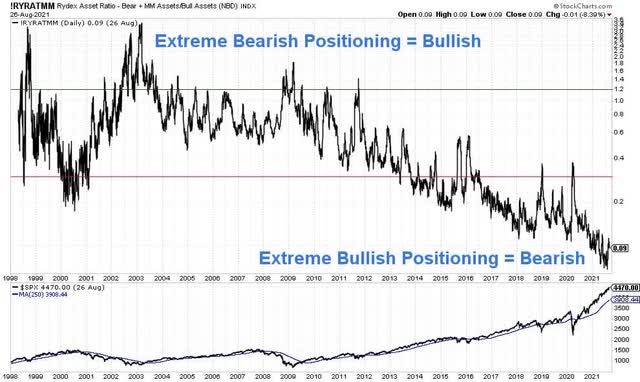 When the majority of investors are already very bullish and “all in”, there is no one left to buy and lots of potential sellers when something changes, as it always does. Most investors will be shocked when their bullish expectations meet the harsh reality of a major bear market.

The U.S. economy is not as strong as it used to be. That is certainly true in the wake of the Covid pandemic, but it has also been true for the past two decades. All of the taxes, regulations and other government interventions in the economy in recent decades have created a weaker and more fragile economy that will make the next recession even worse.

Excessive debt has been the problem with every financial crisis in history, due to prior money creation out of thin air, so the next one promises to be one for the history books given these unprecedented high debt levels. Debt liquidation and defaults will lead to deflation, particularly for asset prices, as we saw in the Great Recession and even more so in the Great Depression.

The primary “bull case” for the stock market and economy over the past 12 years since the Great Recession ended has been “free liquidity” provided in seemingly endless amounts by the Federal Reserve. It is almost as though money really does grow on trees, but money created out of thin air does not create new goods and services that improve living standards…[but it] can flow into financial assets, which helps explain why valuation levels are so high.

The graph below shows “Austrian” Money Supply (AMS), the best measure of money supply that is consistent with the Austrian School of economics definition… AMS is up 40% since February 2020 and is up an astounding 225% since the Great Recession ended in June 2009!

All this money creation has enabled the Fed to target the Federal Funds Rate at only 0.1%…[but] it doesn’t leave much room for the Fed to cut rates to try to prevent a recession, particularly with inflation at over 5% now and, as the chart below shows, the Fed cut rates throughout the prior three recessions and bear markets and was not able to stop them...[and] this leaves the stock market and economy very vulnerable in the next downturn, with potentially no “safety nets” to protect them.

Lastly, for the Keynesian economists who still believe the dogma that Federal budget deficits can prevent a recession – despite any evidence or logical theory to support it – the current Federal Budget Surplus/Deficit To GDP Ratio of -15% is the worst since World War II, as shown below. Given record-high government debt levels and deficits, how much more deficit spending will bond investors be willing to finance, and what good will it do, since deficits did not prevent the Great Recession?

There is much more that can be said to prove our case, but hopefully, the facts provided in this article are sufficient for investors to understand the current risks in financial assets and the economy.

While the exact timing of the next bear market and recession is unknown and there are currently no signs of it with stocks at all-time highs, now is the time for investors to seek out information on how to identify the tell-tale signs of bear markets and how to profit from them, rather than being decimated by them, as the majority of investors, unfortunately, will be.

Editor’s Note:  The original article by Jon Wolfenbarger has been edited ([ ]) and abridged (…) above for the sake of clarity and brevity to ensure a fast and easy read.  The author’s views and conclusions are unaltered and no personal comments have been included to maintain the integrity of the original article.  Furthermore, the views, conclusions and any recommendations offered in this article are not to be construed as an endorsement of such by the editor. Also note that this complete paragraph must be included in any re-posting to avoid copyright infringement.