Cannabis Central: Which Marijuana-Infused Beverage Stock Will Be The Next “Monster”?

When energy drinks became all the rage a few years ago unknown companies like Red Bull and Monster reached the top echelon of beverage companies practically overnight. History is likely to repeat itself with a new beverage sector – cannabis-infused drinks. Established beverage companies, as well as entrepreneurs, are taking a close peek into formulas and methods for infusing CBD or THC or both into beverages. Which companies have the potential to become the next “monster” of the rapidly emerging cannabis beverage market? Read on!

Back when energy drinks took off, Monster (Nasdaq:MNST) saw its stock price increase from $0.0688 at the end of August 2002 to its current level of $58.48 – an amazing 85,000% increase- yes, 85,000% – in 17 years. Even if we were to go back just 10 years the stock has increased by a very respectable 1575% over that period. Getting in early in yesterday’s “hot new” beverage sector winners would have meant an early retirement. Might similar gains be made in the cannabis-infused beverage market in the coming years?

Experts predict that the global cannabis-infused beverage market will jump from its current value of $89 million to a whopping $1.4 billion by 2023 and then keep soaring to over $4.4 billion by 2025. 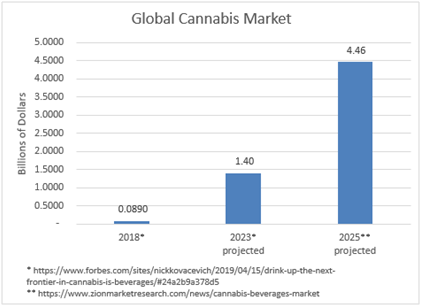 Major companies are getting involved in the sector:

It’s usually innovative, early mover, smaller companies that benefit the most in these market breakouts and below are the contenders to dominate this burgeoning market:

1. Sproutly Canada Inc. (CSE:SPR), a Toronto-based cannabis company that cultivates pharmaceutical-grade cannabis, focuses on the cannabis beverage and edibles market and, as mentioned above, is working on formulating the first natural, completely water-soluble cannabis solution.

2. The Tinley Beverage Company Inc. (CSE:TNY), a beverage company that focuses on hemp-infused beverages and supplements, is based in Los Angeles and has the only patent-produced liquid supplement that contains certifiable phyto-constituent-rich hemp oil.

3. New Age Beverages Corp. (NASDAQ:NBEV), based in Denver, Colorado, has renewed its 10-year licensing agreements with Bob Marley’s family and expanded the Marley collection to include Marley+CBD, which will contain 25 mg of pharmaceutical-grade CBD per serving.

4. BevCann Enterprises Inc. (CSE:BEV; OTC:BVNNF), a Canada based manufacturer of cannabis-infused beverages using THC and CBD from both cannabis and hemp.

5. Zenabis (TSX:ZENA), a marijuana company with a major greenhouse complex in Langley, is planning to move into cannabis-infused drinks in a big way once edibles become legal in Canada on December 16th of this year announcing on Monday, Aug. 26 that it has entered into an agreement with a Canadian beverage company that will supply Zenabis with cannabis-infused inputs.

6. Dixie Brands inc. (CSE: DIXI.U ,OTCQX:DXBRF) announced a partnership with drink-maker AriZona on August 9th to work towards creating a line of THC-infused beverages which will last three years with an option to renew up to two additional terms of two years each. The deal also gives AriZona the ability to invest up to US$10 million into Dixie in subordinate voting shares

The above 6 fledgling cannabis companies may be hoping to become the next “monster’ stock but they all have a long way to go.