Canada's "Misery Index" On The Rise – but Still Below the Misery in the U.S.

So say Pacifica Partners (www.pacificapartners.com) in edited excerpts from an article* which Lorimer Wilson, editor of www.munKNEE.com (Your Key to Making Money!), has further edited ([ ]), abridged (…) and reformatted (some sub-titles and bold/italics emphases) below for the sake of clarity and brevity to ensure a fast and easy read. The author’s views and conclusions are unaltered and no personal comments have been included to maintain the integrity of the original article. Please note that this paragraph must be included in any article re-posting to avoid copyright infringement.

Pacifica Partners go on to say, in part:

While Canada has earned accolades from politicians and individuals for its fiscal prudence and strong banking system, many Canadians are not receiving the benefits of the gleeful conditions that they are being told they are experiencing…The Canadian misery index ( calculated by adding the unemployment rate to the inflation rate) has stealthily marched higher after hitting a low in the first quarter of 2008. The data indicate that the cost of living in Canadian cities is rising, and high unemployment is mounting…

[The chart below reveals]… that Toronto’s misery is at 16-year highs, while Vancouver’s and Montreal’s misery has also climbed sharply higher, and is now above the psychological threshold of 10%. Many might find this surprising, since this is counterintuitive to the broadly bullish opinions that have become the consensus. This finding is particularly noteworthy because the Organisation for Economic Co-operation and Development has singled out Canada as a country facing significant challenges from a steady climb in consumer debt. 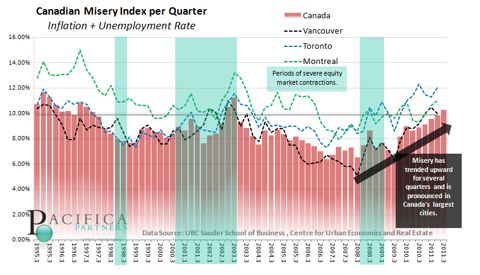 (Click here to view a larger version of this chart)

Critics will note that by excluding volatile items such as food and energy, inflation is up 1.9%, and that the misery index has traditionally used total, or “headline,” inflation. At the same time, many investors and non-investors alike are particularly irked by the “excluding food and energy” part of inflation data. With a hint of sarcasm, they will say, “Sure, inflation is no problem – if you do not have to drive or eat.” It is true that globally, much of the increase in headline inflation has been driven by food and energy prices due to weather and the effects of easy monetary policy in the US. Should headline inflation persist through high energy and food prices, it could trickle down into the core-inflation numbers.

With the Canadian and U.S. economies so closely linked to one another…much of what happens to Canada’s economy depends on the policy path of the Federal Reserve…The Federal Reserve has a dual mandate…[of] keeping prices (inflation) under control [and being] mindful of the U.S. unemployment rate. To that end, with 14 million Americans out of work, the Fed sees unemployment as the bigger issue…[but] that could inadvertently stoke inflation.

As Central Bankers have learned from past experience, once the inflation genie is let out, it is difficult to rein it in. Time will tell if this will be the case, but if inflation becomes persistent, then the misery index will become a much more popular economic data point than it has been in a very long time.

[To repeat] Canadians may wish to consider the underlying trends in inflation and unemployment before making major financial decisions. Recent unemployment data in Canada shows unemployment at 7.3% [vs. 9.0% in the U.S.] and inflation rising to an uncomfortable 3.2% [vs. 3.6% in the U.S. for a Misery Index of 10.5 vs. 13.6 in the U.S.]

34% of Americans say gold is the best long-term investment, but how many of that 34% actually own it in the form of coins and bullion? No one has that figure, but my guess would be less than 1% of the total population, and when global investment demand doubles or triples (or more) from current levels — a distinct possibility — and you paint a whole new picture for gold. You begin to understand why gold is not in a bubble at all but, in fact, is in a long-term secular bull market that is still amassing considerable potential energy. Words: 1092

The economic news is not very encouraging these days. Everywhere I’ve looked, and I’ve looked at 10 different indicators (surveys, polls and indexes), things appear to be either down or stagnant. Let me be more explicit. Words: 1058

3. Americans: Here’s How to Protect Your Retirement Assets From Coming Gov’t “Confiscation”

Mandatory IRAs as proposed by the Obama Administration is just the 1st step in stealth nationalization and forced investment of our retirement benefits to support the treasury debt market! [As such,] every American with substantial retirement assets must [begin now to] protect themselves from having to become buyers of last resort for US treasury obligations. [Let me explain.] Words: 6349

Share
Previous How Does GDP Growth in US & UK Compare With Other Major Economies? (+2K Views)
Next You’ll Never have a 10-bagger if you Sell a Stock after a 2-bagger! Here’s when to Ride a Winner – or Sell (+3K Views)