Bitcoin: This Is More Than A Dip; This Is Initial Plunge Into A Bear Market

…Is this a “buy the dip” situation as some believe, or is the final top in? That is the question we will now attempt to answer.

The original article by Clive Maund has been edited for length (…) and clarity ([ ]) by munKNEE.com to provide a fast & easy read. For all the latest – and best – financial articles sign up (in the top right corner) for your free bi-weekly Market Intelligence Report newsletter (see sample here) or visit our Facebook page.

There are hordes of young and not so young fools out there who are now “champing at the bit”, wanting to buy Bitcoin. They watched enviously as it rose into the Stratosphere [$19,795.61 last Thursday], and now after its smack down [to a low of $12,570.24 early on Christmas Day], they can seize their chance to buy at a heavy discount from the peak price, thinking they have gotten hold of a bargain – ignoring the fact that this “heavy discount” is from a massively overinflated price. After all, “buy the dip” has worked like clockwork now for years, right? – and this is another dip, is it not? WRONG!! – this is not a dip, it is the initial plunge of a bear market in something that got insanely overbought and has now burned out. [Read: Bitcoin: Total Wipeout Alert]

On the shorter-term 6-month chart below we can see why the “buy the dip” crowd, who started to appear in the late trade on Friday, might succeed in generating a bounce here [currently up to $16,093 – Go here for the latest price], which could be quite sizeable, because the Bitcoin price has arrived back at support in the vicinity of its late November highs, and above its rising 50-day moving average. They can quite rightly claim that moving averages are in bullish alignment and the earlier horrendously overbought condition has eased, and they will certainly get all the encouragement they could possibly hope for from their vociferous cheerleaders, who have a vested interest in talking this market up, but what they may be less aware of, or willfully ignoring, is what we will now look at on the 3-year chart. 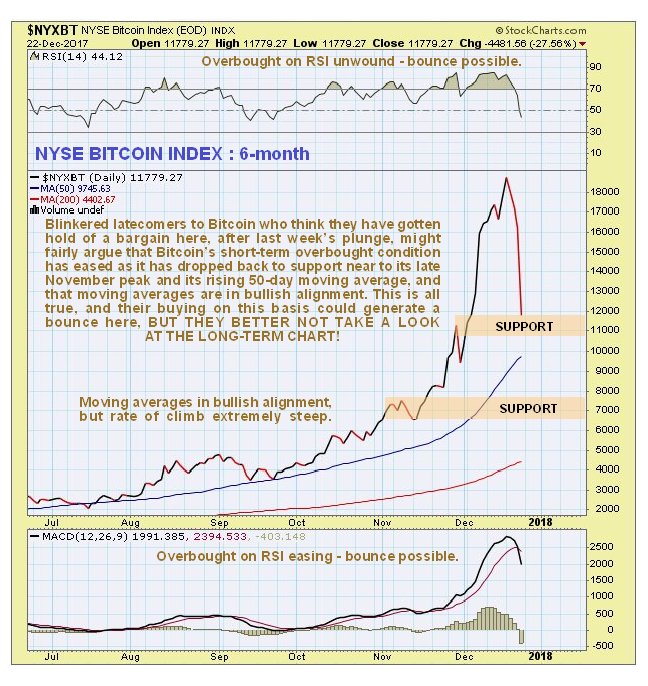 The latest 3-year chart below shows that Bitcoin has just blown out following a terminal vertical melt-up that marked the final stage of a parabolic blow-off. Just how extreme it got is made plain by the fact that an attempt to draw a parabolic uptrend on this chart proved to be non-productive, because the price got so far ahead of the parabola as to render it obsolete. This chart also shows a gap of stupefying magnitude between the Bitcoin price at its peak and its moving averages, and an unsustainably steep rate of climb of the 50-day moving average. Those market commentators who were talking Bitcoin up to $40,000 or even $100,000 – and some were well-known and respected – should be ashamed of themselves. [Read:Bitcoin Price Of $32,500 Possible By January 1, 2018! Here’s Why; Bitcoin Could Reach $40,000 By the End of 2018 & Ethereum Could Go To $1,500!] 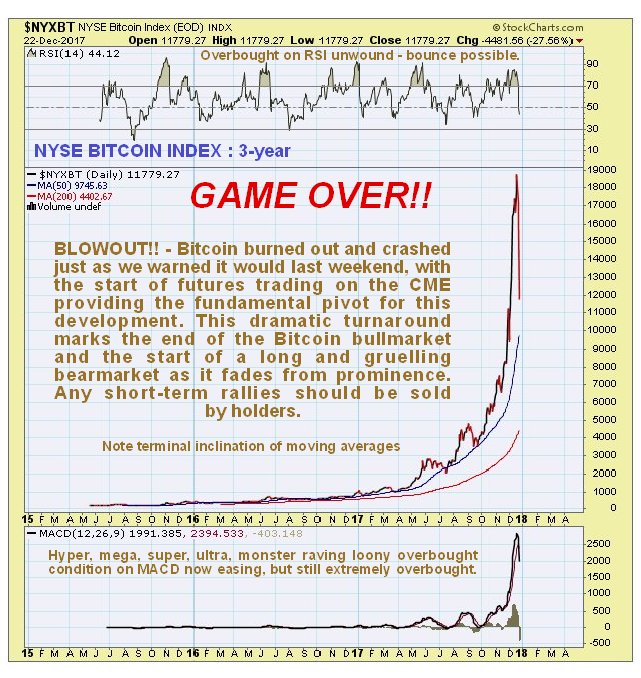 The above chart says that Bitcoin is done, finished, and anyone thinking that they have gotten hold of a bargain here, unless they are an artful short-term trader, is going to get their head handed to them on a plate – and it will be the same all the way down, as it drops lower and lower. At the end of the day Bitcoin is just a worthless line of code that fools have been jockeying to buy and overpay for. There you have it Bitcoin aficionados – GAME OVER!!

Below is a asset bubble chart showing that bitcoin is now the biggest bubble in history, having surpassed the Tulip Mania of 1634-1637.

The pattern on the Bitcoin charts has all the hallmarks of a final terminal blow off that will be followed by a catastrophic wipeout and probably soon…The inexperienced get rich quick merchants who have been flocking in droves to Bitcoin in recent weeks will be vaporized.

The above are the questions you need to be asking now, during the euphoria stage of a bull market. I’m not calling the top in bitcoin. I’m saying prepare for the top.
4. Use This Chart to Time Your Investment In Bitcoin
We can expect bitcoin to begin to trade along other typical stock market patterns, like seasonality, next year, and this chart will be one I use to time any investments into it.

The initial target of $24,340 is realistic, considering the parabolic nature of the larger uptrend. With a sustained uptrend, the next target of $32,500 is on January 1, 2018. That upper price level is highly ambitious, yet not out of the question.
Share
Previous 5 Surefire Signs You Have Too Much Debt
Next Three Investment Resolutions For A Richer 2018