$10,000 Gold offers a candid insight into the current state of the economy, the underlying causes

of gold’s rising value and why the price of gold will continue climbing to $10,000/ounce and beyond in the years to come. The book contends that intelligent investors have no choice but to invest in this precious  metal to stay safe no matter what lies ahead.

Below is an excerpt* from Nick Barisheff‘s (www.bmgbullion.com) new book, $10,000 Gold: Why Gold’s Inevitable Rise is the Investor’s Safe Haven which is available now for pre-order on Amazon.com and Chapters.Indigo.ca and will be available in bookstores the week of May 6, 2013.

This authorized excerpt is presented compliments of Lorimer Wilson, editor of munKNEE.com (Your Key to Making Money!) and the Intelligence Report  newsletter. Please note that this paragraph must be included in any article re-posting to avoid copyright infringement.

“The modern Asian, Middle Eastern or South American buyer is not interested in gold stocks or any other form of paper, as they were in 1980. Today, they want physical bullion and nothing less.”  – Nick Barisheff, author, CEO Bullion Management Group Inc. and one of the world’s leading authorities on gold.

In order to understand the staying power of these myths, we need to remind ourselves that precious metals are the only form of money governments and their central banks cannot multiply at will. In this way, it exists outside their control. Therefore, the incentive to weaken confidence in precious metals and to strengthen confidence in fiat currencies is strong. It became much stronger on the day in 1971 that President Nixon made the world’s reserve currency pure irredeemable fiat.

The Chinese not only believe this is the case, but they are acting on it by exchanging U.S. dollars for gold, directly through central bank buying and indirectly through sovereign wealth funds, as we will discuss in detail later in the book.

Many gold watchers, most notably the Gold Anti-Trust Action Committee (GATA), have amassed a mountain of circumstantial evidence confirming surreptitious central bank “management” of gold. GATA came into existence in 1998 to “expose, oppose and litigate against collusion to control the price and supply of gold and related financial instruments.”(3) GATA has done more than any single organization to shed light on the battle between governments, banks and financial institutions and their fiat monopoly and gold.

Western central banks, along with those who have profited most from the existing fiat system, which has the U.S. dollar as the world’s reserve currency, have every reason to discourage the rest of the world from buying gold bullion. This “gold war” is essentially a campaign to maintain the status quo, which finds Western banks in the United States and Europe in a privileged position that they are in no hurry to relinquish. As a result, an unrelenting perception management campaign continues, despite gold’s rising price. This is the seed from which most myths we will explore throughout this chapter arise.

Of course, there are many more than six myths about gold. As currencies continue to weaken and gold appears to rise in currency terms, more myths will surface. These myths prevent the Western investing public from buying gold, and they also shake gold from the hands of those who own it. Unfortunately for those who wish to control the price of gold, the Eastern bullion buyers, who seem to view gold from well beyond the controlled parameters of fiat thinking, see through these myths and are quite happy to take advantage of the bargains they provide.

IN DEFENSE OF GOLD

Before looking at the prevailing myths about gold ownership, we will look at the reasons most often presented against owning large amounts of physical bullion. The three most prevalent reasons are:

I argue that these reasons have little substance.

The cost of storing large amounts of gold is insignificant compared with the cost of losing our wealth. It is far less than we would pay for wealth protection insurance. Unfortunately, no wealth protection insurance policy exists that is as effective as gold ownership. Is the price of storage not worth the price of knowing our family’s financial future is insured against systemic economic meltdown? What value do we place on the peace of mind of knowing our gold bullion is secure and protected?

An investment that has dividends paid in dollars is losing value through the insidious effects of inflation. That investment would have to have yielded 12 to 15 percent per year for the past decade to match the rising price of gold. Dividend payments are closer to 2 or 3 percent per year. Dividends are not paid on anything we put in storage; they are paid only when there is an element of risk involved. If we were to put cash in a safety deposit box, it would be risk-free, but would yield no interest or dividends.

ETFs, gold shares or options and futures are far better suited for speculation. Gold bullion, gold coins or even gold statuary are forms of wealth preservation and should therefore be held as long as they are required to serve that purpose.

So what prevailing myths have these reasons spawned?

Myth 1: Gold Is a Bad Investment

This myth starts with a faulty premise. Gold is not an investment. Derivative forms of gold, such as stocks, ETFs, futures and options, might be good trading vehicles, but unencumbered gold bullion and coins are stores of wealth. Gold is money and not an investment.

“Investment” implies something you buy to trade. You gain or lose on an investment because of the risk you are willing to take by removing funds from the security of a vault or wallet and speculating with them. When we speculate, we are constantly waiting for the right moment to sell and lock in our profits. Gold is like money stored in a vault, but unlike currencies, it doesn’t lose value.

This first myth seems to have its roots in the 1979–1980 rally that saw gold reach $850 an ounce. The comparison between that rally and today is impossible to make, as conditions are entirely different. Today, gold is rising for different reasons, and the buyers who are fueling this rally are interested in physical bullion, not gold shares, futures or options.

Another important distinction is China’s position. In 1980, China had no foreign reserves to speak of. Today, it holds more than $3 trillion. The citizens of China were banned from owning gold in 1980. Today, they are encouraged to put 5 percent of their savings into gold. China has introduced initiatives that are so gold friendly that the Chinese will soon be the world’s largest gold consumers. China is also the world’s largest gold producer. India, the world’s current largest buyer of gold, was a poor creditor nation in 1980. Today, it is an economic powerhouse that holds considerable U.S.-dollar foreign reserves. As the U.S. dollar continues to lose value through debasement, these older cultures that have an inherent trust for gold will accelerate their buying. They understand currency crises and are not concerned about the dollar price of gold; they would rather hold gold at any price than hold devaluing dollars.

Perhaps the biggest distinction of all is that the modern Asian, Middle Eastern or South American buyer is not interested in gold stocks or any other form of paper, as they were in 1980. Today, they want physical bullion and nothing less. 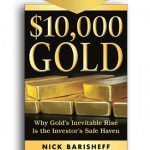 Haven which is available now for pre-order on Amazon.com and Chapters.Indigo.ca and will be available in bookstores the week of May 6, 2013.

2. Nick Barisheff: These 6 Trends Will Drive The Price of Gold For Decades

This new video by www.bmgbullion.com and www.FutureMoneyTrends.com identifies and discusses: 3 mid-term trends that will drive the fiat price of gold to heights western economists can not even imagine and 3 irreversible trends that will result in further currency devaluation and major drivers in the price escalation of gold.

3. Buy Gold to Protect Your Wealth – Not As Speculation! Here’s Why

In our travels to the Middle East, the Far East and South and Central America [we have found that] most people in those parts of the world see gold as the protector of wealth [as opposed to] in the West where it is viewed as a commodity for speculation… [That shouldn’t be the case. Let me tell you why.] Words: 2159

4.  It is Imperative to Invest in Physical Gold and/or Silver NOW – Here’s Why

Asset allocation is one of the most crucial aspects of building a diversified and sustainable portfolio that not only preserves and grows wealth, but also weathers the twists and turns that ever-changing market conditions can throw at it. However, while the average [financial] advisor or investor spends a great deal of time carefully analyzing and picking the right stocks or sectors, the basic and primary task of asset allocation is often overlooked. [According to research by both Wainwright Economics and Ibbotson Associates and the current Dow:gold ratio, allocating a portion of one’s portfolio to gold and/or silver and/or platinum is imperative to protect and grow one’s financial assets. Let me explain.] Words: 1060

5. Gold is Not an Investment – Gold is Money – and Here’s Why

6. Nick Barisheff: Make Sure You’ll Actually OWN the Gold Bullion Before You Buy – Here’s Why and How

Worldwide economic uncertainty has created a growing interest in precious metals as a way to…protect one’s wealth from impending economic Armageddon…Unfortunately, many today don’t know how to purchase or store bullion, and consequently may find themselves as vulnerable to financial collapse as those who didn’t purchase any bullion at all. [This article outlines what rigorous due diligence is absolutely required when entering into an agreement to buy gold bullion and how it should be stored and why. Don’t buy any gold product without reading this article first.]

7. It’s Not a Question of IF, but WHEN, Inflation Will Arrive

America’s massive debt and unfunded liabilities make inflation the only viable option for today’s policymakers because when the value of future dollars is diminished, future obligations in those depreciated dollars are diminished.