Another Bear Market Coming? Here's How to Avoid Its Bite

Lorimer Wilson August 23, 2011 Comments Off on Another Bear Market Coming? Here's How to Avoid Its Bite 2,335 Views

Recent stock market action has brought the major indexes into at least a correction zone, if not an outright new bear market. So, if this is a new bear market, how can you dodge another bear bite? [I have 4 suggestions on how to do just that. Read on!] Words: 746

So says John Nyaradi (wallstreetsectorselector.com) in an article* which Lorimer Wilson, editor of www.munKNEE.com (It’s all about Money!), has further edited ([  ]), abridged (…) and reformatted below  for the sake of clarity and brevity to ensure a fast and easy read. Please note that this paragraph must be included in any article re-posting to avoid copyright infringement. Nyaradi goes on to explain: 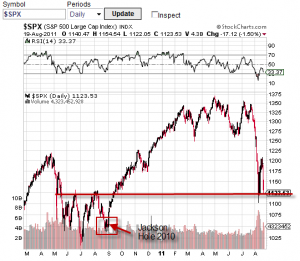 In the chart of the S&P 500, above, you can see how the index has taken a sharp decline since the highs of mid-July. It is now below its 200 day and 50 day moving averages (red and blue lines) and has broken several long term trend lines. Furthermore, the 50 ma has crossed below the 200 day ma, forming what is widely known as the “death cross” which is a quite reliable statistically proven technical indicator [see here (1) for a recent article on the current “death cross” event]. While not perfect, as no indicator is, the “death cross” has managed to sidestep the biggest part of every recent bear market, while its counterpart, the “golden cross” has captured significant gains during bull markets.

However, it should also be noted that support at the 1120 level has been tested several times and so now the bears will have to push through that level to confirm that we are actually in the beginning days of a new bear market.

It is my opinion that this trading range will not continue for very long and that we’ll see a directional breakout, either up or down, within the next few weeks. Technical and fundamental conditions would indicate that the likely probability of that move would be down. If that turns out to be the case, as investors and traders, we have several choices if we believe a new bear market is upon us:

So from the above discussion we can conclude that we are at the very least in a significant correction of an ongoing bull market or either in or close to entering a new bear market. Coming days will tell us which way things will go and confirm this one way or other.

Whatever happens, exchange traded funds offer the power and flexibility to seek profits in any market environment.

Title and Link to Article Referenced Above:

We have ongoing debt crisis talks in Europe, weak housing data in the U.S., tepid growth in Germany, and higher than expected inflation in the U.K. [and, in addition to] all this “cheerful” news, the recent “death cross” that [has occurred] on the S&P 500 Index. While a “death cross” is concerning and should be respected it does not mean the end of civilization as we know it, however. [Below are the results of a long-term study that clearly defines what the short and mid-term implications are, in fact, for the market.] Words: 700

Share
Previous Your Savings and Investments Will Be in Dire Jeopardy Going Into 2012 Unless….. (+2K Views)
Next What Do Gold Measurements "Troy" Ounce and "Karat" Really Mean? (+10K Views)