Americans Greasing the Tracks for a Financial Crash! Here's Why

Lorimer Wilson February 9, 2012 Comments Off on Americans Greasing the Tracks for a Financial Crash! Here's Why 2,043 Views

For the bulls yesterday’s news of a much higher-than-anticipated jump in consumer borrowing is yet more proof that the recovery is on track. [For the bears it is outright confirmation that America’s spending is setting it up for a major financial crash! Let me explain.] Words: 527

So says Michael J. Panzner (www.financialarmageddon.com) in edited excerpts from his original article* which Lorimer Wilson, editor of www.munKNEE.com (Your Key to Making Money!) and www.FinancialArticleSummariesToday.com (A site for sore eyes and inquisitive minds) has edited ([ ]), abridged (…) and reformatted (some sub-titles and bold/italics emphases) below for the sake of clarity and brevity to ensure a fast and easy read. The article’s views and conclusions are unaltered and no personal comments have been included to maintain the integrity of the original article. Please note that this paragraph must be included in any article re-posting to avoid copyright infringement.

Panzer goes on to say, in part:

[According to a recent report in Bloomberg] consumer borrowing in the U.S. rose more than forecast in December, driven by demand for auto and student loans. Consumers “are willing to take on this debt because there is some increasing degree of confidence in the economy,” said Ken Mayland, president of ClearView Economics LLC. “Consumers over the past several years have done a pretty good job of repairing their balance sheets.”

An improving job market may be giving households the courage to take on more debt in order to sustain spending, which accounts for about 70 percent of the economy BUT increasing dependence on credit may be an indication the gains in employment have yet to push wages high enough to single- handedly give consumers the means to keep shopping. 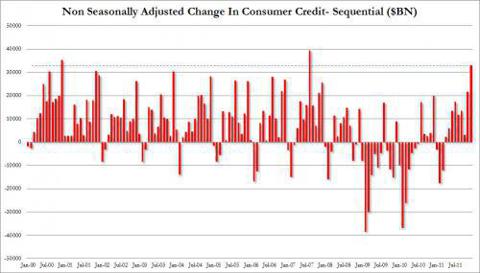 [According to] the Rochester Democrat and Chronicle “Student Debt Could Be Next Economic Bomb” leading us to another train wreck.

A report by the National Association of Consumer Bankruptcy Attorneys says that student debt is looming as a national problem that could have repercussions reminiscent of the mortgage crisis as what they are seeing at the ground level “feels too much like what they saw before the foreclosure crisis crashed onto the national scene.” In the survey:

The report urges a change in bankruptcy laws so that those burdened with student debt would be on the same footing as others in debt facing bankruptcy…William E. Brewer Jr., president of the National Association of Consumer Bankruptcy Attorneys, offered a warning, “Take it from those of us on the frontline of economic distress in America,” he said. “This could very well be the next debt bomb for the U.S. economy.”

Wars and depressions largely characterize the periods of time where there have been significant run-ups in the level of the U.S. National Debt Burden per Capita [i.e. the U.S. National Debt Burden per Capita-to-income Index], with the debt taken on to support the costs of the U.S. Civil War and World War II being the most significant. Today… it is perhaps most comparable to the Great Depression. [Take a look.] Words: 326

When people talk about getting their personal finances in order, they usually try to find relatively pain-free and low-cost ways to reduce debt and increase savings but this is a long-term approach which some people just cannot “afford”. [For them] …it may be worthwhile to consider taking the hard way out of debt. [Let me explain.] Words: 1370

5. 2 Ways to Reduce Your Debts Using the “Snowball” Method

What is the best way to reduce debt? The most-efficient means is probably the snowball method. There are two main variations of the snowball method, but you must consider your personality to determine which of the two is right for you. [Let me explain.] Words: 1251