$1,523] has been completed. The up move just starting should be…the longest and strongest portion of the bull market…at least a 200% gain… [to] a price over $4,500. The largest corrections on the way to this target, of which there should be two, should be in the 12% to 14% range. [Let me explain how I came to the above conclusions.] Words: 760

So says Alf Field in edited excerpts from his original article*.

There is a strong probability that the correction in the price of gold has been completed. In EW terms, [read Gold Bounce Confirms Bull Market Intact on Its Way to $3,000 – $10,000 for another analysis] the correction consists of three waves, an A wave down, a B wave rally and a final C wave decline. There is usually a relationship between the A and C waves. Often they are equal or have a Fibonacci connection. The chart below is of the gold price using PM fixings: 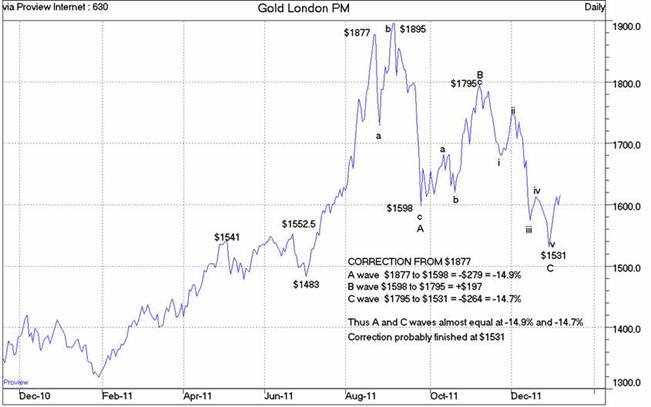 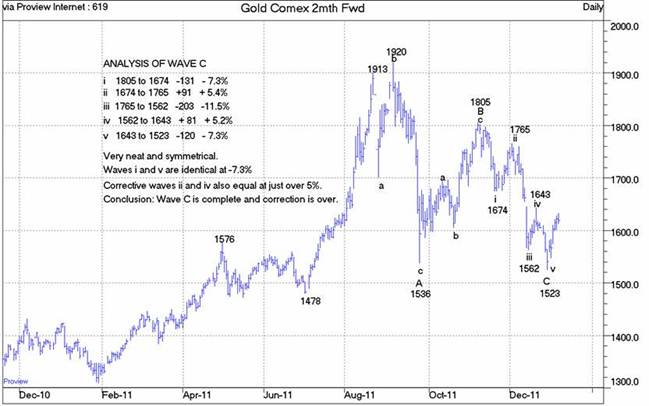 The Alf Field: Gold Going to $4,500/ozt. in Next Wave Towards Parabolic Peak portion of the Gold Symposium speech suggested that the correction would be between 21% and 26% in spot gold prices. The actual decline was from $1920 to $1523, a loss of -$397, or -20.7%. This is just below the target range but qualifies as one degree larger than the 14% corrections in the previous up move from $680 to $1913 [per troy ounce. Read What Do Gold Measurements “Troy” Ounce and “Karat” Really Mean? for a full understanding of the difference between an ounce and a troy ounce.]

The probability of this analysis being correct is high, perhaps 75%.  Smaller probabilities allow for: (i) this to be an A wave of a larger magnitude correction; (ii) the current correction becoming more complex, perhaps reaching the lower price targets (e.g. -26%); and (iii) the possibility of deflation, defaults and depression emerging, also testing lower price targets.

To achieve the EW target of $4,500/ozt. on the next upward move [in gold] will require something to trigger substantial new buying of gold. What could that event be? By definition, it will be a surprise to all market participants, a “black swan” event. That doesn’t prevent us from making a guess [and] one likely area from which problems could emerge…[would be] derivatives. [I explain why that might well be the case in my article Alf Field: Will Derivative Losses Be Black Swan Event Propelling Gold to $4,500?.]

2. Alf Field is Back! The “Moses” Generation and the Future of Gold

I have come out of retirement for this one off, once only, speech to warn that the good ship “Life As We Know It” is sinking. You have the choice of getting into a life boat now or going down with the ship. The life boats consist of precious metals and other assets that will survive the coming currency destruction. [Let me explain.] Words: 1400

To achieve the EW target of $4,500/ozt. on the next upward move [in gold that I laid out in my article Alf Field: Correction in Gold is OVER and on Way to $4,500+!] will require something to trigger substantial new buying of gold. What could that event be? By definition, it will be a surprise to all market participants, a “black swan” event. That doesn’t prevent us from making a guess [and] one likely area from which problems could emerge…[would be] derivatives. [Let me explain why that might well be the case.] Words: 591

8. What Do Gold Measurements “Troy” Ounce and “Karat” Really Mean?

9. Gold is NOT a Perfect Inflation Hedge! Here’s Why

Almost any traditional inflation hedge [such as gold, silver as well as real estate, stocks or whatever,] has difficulty in reaching the break-even point on an after-inflation and after-tax basis when we take into account the pervasive problem of hidden “inflation taxes”…If our future is one of high inflation, then whether and how you deal with inflation taxes may be one of the biggest determinants of your personal standard of living for decades to come… Why? Because government fiscal policy destroys the value of our dollars and government tax policy does not recognize what government fiscal policy does, and this blindness to inflation means that attempts to keep up with inflation generate very real and whopping tax payments, on what is from an economic perspective, imaginary income. [Let me illustrate that fact with three examples and suggest some remedial measures.] Words: 3085

Other Articles by Alf Field:

1. Where Is This Unprecedented Global Financial Crisis Headed? A Retrospective from Alf Field

The onset of the world’s worst financial crisis in many decades is one of the most important factors (if not the most important factor) currently influencing investment decisions. The crisis has created chaos and confusion. Not many people understand how the world has arrived at this unfortunate situation. This report endeavours to identify the underlying causes of the crisis and explains why the USA current account deficit has been the main destabilising force in world finance. Words: 3806