…If you’re not yet familiar with the Santa Claus Rally, First-Five Days, and January Barometer gauges, it’s about time you should. These 3 gauges, together and alone, have a very impressive predicting power, whether you we believe in Fortune Telling/Tellers, or not.

As you can see, the SCR has a decent track record predicting the expected gain throughout the upcoming year. 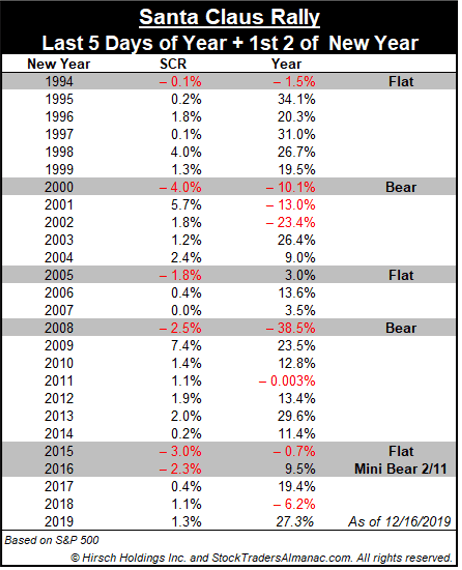 However, the SCR is only one out of three gauges. The other two that complete the “January trio” are:

According to Stock Trader’s Almanac, the first five trading days (FFD) of any calendar year are considered to be a reliable “early warning system” that has an accuracy rate of no less than 84% (!) in predicting the FY potential gains.

Going back to 1950, the JB has a 75% accuracy rate, with only nine significant misses.

Each of the three gauges (SCR, FFD, JB) is interesting on its own, but what about cases where all three are pointing at the same direction? This is where things really get interesting (and even more meaningful, statistically).

Such a “triple sweep” (positive SCR, FFD, and JB) has an accuracy rate of over 90% (!!!), with the full calendar year finishing in positive territory in 28 out of the 31 years that started with a “triple sweep”.

The data below shows the past 30 “triple sweep” years, and…2019 is about to become the 28th year out of 31 years/cases where a positive “triple sweep” proved to be a reliable indicator.

If history and statistics are of value, within 33 calendar days (once January 2020 finishes) we will be able to tell whether 2020 is about to turn out positive, with an accuracy rate of 90.32%…

Editor’s Note:  The above excerpts from the original article by The Macro Teller have been edited ([ ]) and abridged (…) for the sake of clarity and brevity.  The author’s views and conclusions are unaltered and no personal comments have been included to maintain the integrity of the original article.  Furthermore, the views, conclusions and any recommendations offered in this article are not to be construed as an endorsement of such by the editor. Also note that this complete paragraph must be included in any re-posting to avoid copyright infringement.