economy in history according to the stock market capitalization to GDP ratio, which, incidentally, is Warren Buffett’s favorite means of valuing stock.

The original article has been edited here for length (…) and clarity ([ ]) by munKNEE.com to provide a fast & easy read.

Bill King of The King Report notes that based on this metric, stocks are now valued at 144.15% of US GDP, surpassing their previous peak set at the absolute top of the Tech Bubble in March 2000. 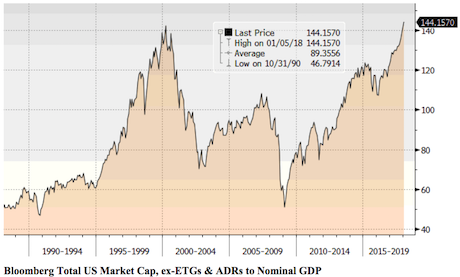 While some pundits may point to the economy or the Trump economic agenda for this move, the reality is that everything the markets have done since 2008 has been driven by the Fed creating a bubble in US sovereign bonds, also called Treasuries, and because these yields represent “the risk-free rate of return” for the entire financial system ALL risk, including stocks, adjusted accordingly.

…I am growing increasingly concerned about…what’s coming…We’re currently in “late 2007” for the coming crisis. The time to prepare for this is NOW before the carnage hits.

1. This Simple Indicator Suggests S&P 500 Still Far From A Bubble

…2017 provided many good times [but,] for worriers, the low volatility and steady gains of last year signal bad times are likely in 2018…[and] they have a point. It’s true that good times can’t last forever. [That being said,] it’s also true that we can spot when the good times have gone too far with this simple indicator.

2. Will Similarities Between Trump & Kennedy Rallies Continue & Conclude In A Market “Slide” In Early 2018?

Comparing the Trump and Kennedy rallies—as in the first chart below—I expect Trump’s market to build an even bigger slide.

3. Recent Stock Market Returns Are Not Excessive Relative To History? Here’s Why

US stock market valuations appear stretched, but history reminds us that this form of excess can endure and, with the U.S. economy posting ongoing signs of growth, the market’s upbeat profile of late has macro support. Nonetheless, it’s prudent to consider how performance stacks up in terms of history.

4. These Indicators Suggest We Could Be On the Precipice Of A Major Move to the Downside

As the next crisis erupts, the mainstream media is going to respond with shock and horror but the only real surprise is that this ridiculous bubble lasted for as long as it did. The truth is that a market decline is way overdue.

6. Stock Market: “A Day Of Reckoning Is Coming” Say These Insiders

7. Curb Your Enthusiasm! It’s Time to Reset Expectations – Here’s Why

Valuations and sentiment play into future stock market returns…as valuations indicate what people are willing to pay for a dollar of earnings. During times of exuberance, investors overpay for earnings and, during times of fear, investors underpay for earnings. Currently, two measures of sentiment are sending cautionary signals that 2018 may not be as strong of a year.

8. U.S. Stock Market Has Entered the Final Stage of a Super-Charged Tulip Mania

9. Harry Dent: Mark My Words: “The Bubble May Well Be Peaking!”

12. Enjoy the Melt-up Because This, Too, Will Come To An End

There has been nothing that has been normal about this economic recovery, and I don’t think there’s going to be anything that’s normal on how this all ends. For now, enjoy the melt-up, because this too will come to an end.

13. These 6 Charts Say: “What’s Going On In the U.S. Economy & Market Is Neither Unprecedented Nor Extraordinary”

Take note: what’s going on today in the economy and in the markets is not unprecedented or extraordinary. Below are 6 charts to support said contention: