The financial markets were in distress lately because of Fed Chairman Ben Bernanke’s suggestion that the Fed might taper off its quantitative easing programs starting at the end of this year and ending in 2015. Here are five reasons why markets shouldn’t worry too much about the Fed leaving the stage:

So writes Nico Inberg (http://www.aandelentipper.nl/)  in edited excerpts from his original article* as posted on SeekingAlpha.com under the title 5 Reasons Why The Fed Can’t Stop Buying Treasuries.

Inberg goes on to say in further edited excerpts:

1) The Fed is looking at unemployment The target right now is 6.5% and we’re still a long way from there. The U.S. economy is creating jobs every month at a slow pace of approximately 150,000 a month, but these are mostly part-time and low-paying jobs. More economic growth is necessary for companies to hire more people. When rates tend to go up, companies will find it harder to attract money and won’t be triggered to expand their activity. 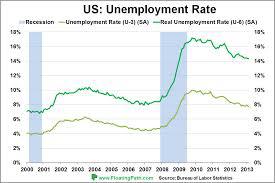 2) Banks can’t survive without low interest rates The low interest rate at which banks attract money enables them to make a huge profit on their daily business. Mortgages and loans to individuals and companies are very profitable now for the banks and this is very welcome in order to shore up their Tier-capital to acceptable levels.

3) Governments can’t survive without low interest rates …[Were] the Treasury yield to go back to 4%, which used to be quite normal, America and dozens of…[other] countries would have to economize in such a way that…[their economies] would turn into recession, if not depression, immediately. 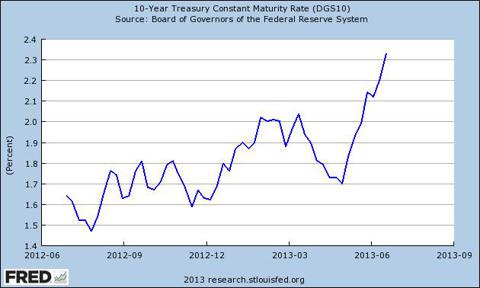 4) Economic recovery is far from convincing …Economic growth is still weak. What will happen when banks all of a sudden have to pay real money for the billions they borrow from the Fed? In Europe, the situation is even worse. Hundreds of European banks depend on the cheap money from the ECB. While the ECB is not easing in a way the Fed or Japan does, it does lend hundreds of billions every month to a large amount of banks across the eurozone.

5) What will happen to the Fed’s balance sheet when interest rates start rising? This year, Frederic Mishkin, James Hamilton, David Greenlaw and Peter Hooper published “Crunch Time: Fiscal Crises and the Role of Monetary Policy,” an 86-page paper that predicts [that]…rising interest rates will cause huge losses at the Fed, which may in turn tip the U.S. into an unsustainable deficit spending path [and that, as such,] the Fed should therefore first stop reinvesting the received interest and build up a reserve balance sheet in order to counter the losses that appear when (especially the longer term) interest rates will rise.

[Given the above,] there is every reason for the Fed to NOT stop the easing programs. It more or less looked like Mr. Bernanke was testing the markets to see what would happen if he really would stop easing. Now that he knows that real interest rates will rise, we should expect the Fed to delay its tapering plans at least a few years.

1. Rising Interest Rates Could Plunge Financial System Into a Crisis Worse Than 2008 – Here’s Why

If yields on U.S. Treasury bonds keep rising, things are going to get very messy.  What we are ultimately looking at is a sell-off very similar to 2008, only this time we will have to deal with rising interest rates at the same time.  The conditions for a “perfect storm” are rapidly developing, and if something is not done we could eventually have a credit crunch unlike anything that we have ever seen before in modern times. Let me explain. Read More »

2. What Will Cause Interest Rates to Rise? Will That Be Good or Bad?

3. A Rise in Interest Rates Would Derail An Economic Recovery – Yes or No?

[While]… I am not currently predicting an acceleration in inflation [I believe]…that the risk of interest rate instability is very real [given that] core inflation is already above a key benchmark that the Fed has staked its credibility on,. It should be of concern to investors that, despite economic growth being so anemic and overall resource utilization being so low (including human resources), there is currently very little margin for error on the inflation front. [In this article the author  evaluates the danger that rising interest rates could potentially have on the U.S. economy.] Words: 2050

4. We Think Interest Rates are Making a Long-term Turn Upwards

We had previously speculated that the 30-year bond rate would continue downward to around 2% based upon a number of very long-term charts. Short-term charts, however, are showing strong technical evidence that interest rates may be turning up in the long term. Words: 267; Charts: 2 Read More »

What Will Happen If (and probably when) the U.S. Debt Bubble Bursts? (+19K Views)

Which Entities Own Most of the U.S. National Debt?