10 Things I Hate About U.S. Stocks As We Move Into Summer

I hate U.S. stocks this summer. It’s not to say that the asset class still does not

So says Eric Parnell in edited ([ ]) and abridged (…) excerpts from the original article.

Parnell goes on to say:

1. U.S. stocks do not line up with the rest of the world

U.S. stocks…have been scorching hot over the past several years. Since the summer of 2011, they have effectively doubled but this does not reflect the reality being felt anywhere else…[because], when considering the performance of stocks across the rest of the world…over this same five-year time period, they have been effectively flat. 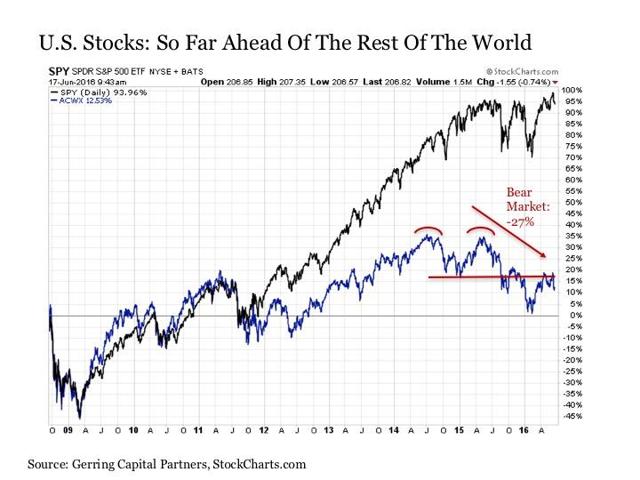 Moreover, while U.S. stocks remain within a stone’s throw of new all-time highs, the rest of the world has been collectively mired in a bear market that began roughly two years ago now. After peaking in early July 2014, the MSCI All Country World Ex-US Index has experienced a peak to trough decline of -27% to date. This has included the formation of a clearly defined double top technical pattern and subsequent break of the neckline last summer and, despite a strong rally this spring, the ACWX remains locked below this previous neckline support.

If the rest of the world already is in a two-year bear market, it is difficult to imagine how much longer the U.S. stock market can remain decoupled and keep things up on its own.

Traditionally, when U.S. stocks are healthy and performing well, U.S. small-cap stocks…assume a leadership role to the upside over U.S. large-cap stocks, but such has certainly not been the case since the start of 2014. For while U.S. large caps have only experienced a relatively mild correction thus far, and still remain close to all-time highs, U.S. small caps have already entered bear market territory with a -27% decline from last summer into early this year. In the process, U.S. small caps broke below their previous lows from October 2014, which is additionally bearish…[In addition,] despite their remarkably strong rally this spring, U.S. small caps are showing signs of failing at its critical long-term 400-day moving average resistance level. 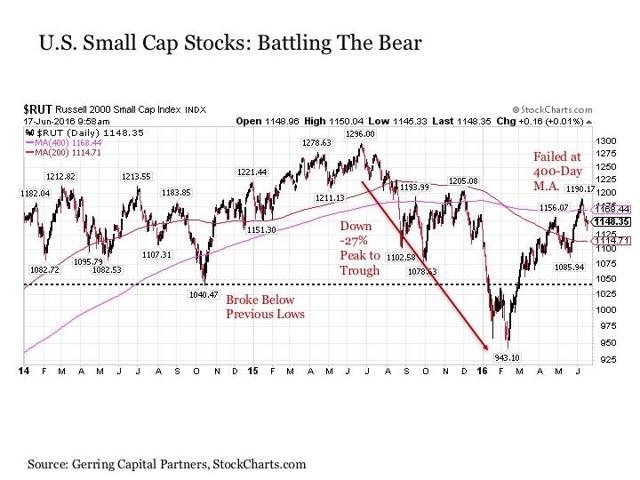 This lack of U.S. small-cap stock leadership and the multitude of bearish signs for the asset class does not bode well for its U.S. large-cap counterparts.

It would be one thing if the S&P 500 Index was rising despite the rest of the world and its U.S. small-cap counterparts if fundamentals were supportive. Instead, fundamentals have been downright lousy for some time. Not only has annual corporate revenue growth been effectively flat for quite a while now, but also annual as-reported corporate earnings growth has been in decline for six consecutive quarters and counting. This includes double-digit declines on an annual basis in each of the past three quarters. For those who are of the annual operating earnings persuasion, they have been just about as bad. At the same time, operating and net income margins have been steadily compressing, which is typically never good for stock prices.

It would be another thing if earnings were expected to get better soon but they are not. Notoriously optimistic earnings forecasts are already projecting another quarter of negative annual earnings growth in 2016 Q2 and are projected to be barely positive in 2016 Q3 (it is very possible they could end up being negative by the time we see these numbers starting in October 2016) so it’s not as though investors are buying stocks based on expectations for an improvement in earnings, unless of course they believe the 20% rebound in earnings projected for next year, which is always forecasted each and every year, but almost never materializes.

Then there’s the valuation problem for the S&P 500 Index. The price index continues to hover near all-time highs, but underlying earnings continue to be revised lower (they incrementally improved for about a week or two before falling back again). As a result, the S&P 500 Index is becoming increasingly expensive even when it is doing nothing other than standing still. It is now trading at nearly 25 times trailing 12-month as-reported earnings, which ranks among some of the highest recorded valuations in nearly 150 years of market history.

The combination of near all-time high prices, declining earnings and historically high valuations are a toxic mix for a nasty price correction at any point in the future.

While U.S. stocks are screaming the optimism of hovering near all-time highs, the U.S. bond market…is telling a decidedly different tale. U.S. Treasury bond yields…have been steadily declining since the end of their last spike higher at the start of 2014, which also so happened to coincide with the beginning of the end for the U.S. small-cap stock bull market. To date, U.S. Treasury yields…are on the brink of breaking lower to new all-time lows. 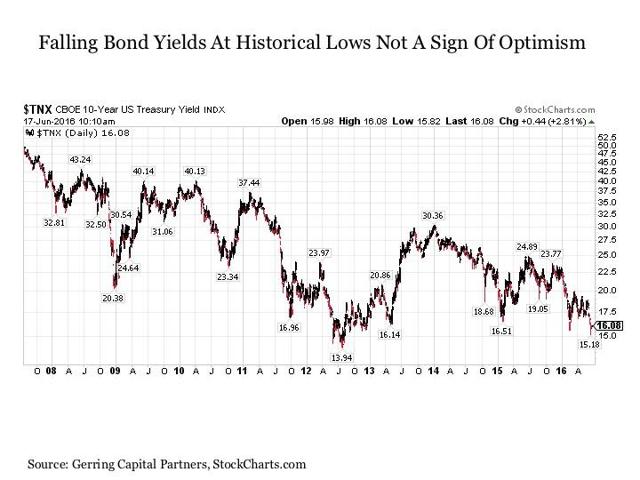 Put simply, if the underlying economy and corporate environment was truly doing so well to justify such lofty stock prices, we would likely see capital rushing out of the safety of Treasury bonds and into the long-term potential of stocks. Indeed, we also would likely see global central banks aggressively raising interest rates in such an environment instead of struggling to raise rates at all if not pushing further into negative territory. The rest of the stock market planet is telling a similar tale to the U.S. bond market, with the lone exception being the S&P 500 Index.

6. The Chinese Renminbi Is Weakening Once More

Since the mid-April highs in the S&P 500 Index, the Chinese Renminbi…has been drifting weaker as U.S. stocks have been pressing higher. 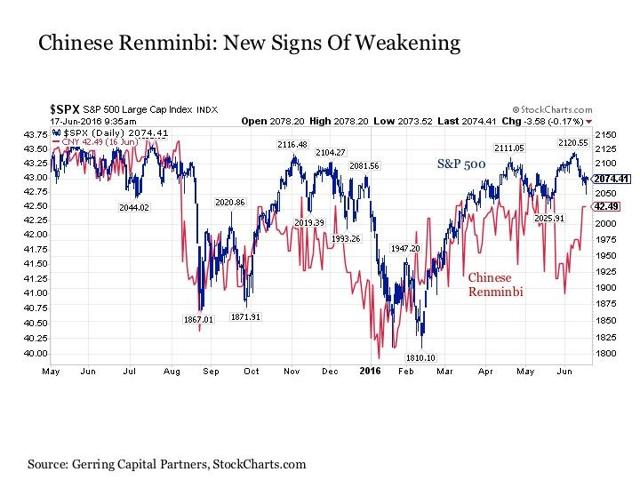 If this weakening trend in the renminbi continues, it bodes ill for the S&P 500 Index for the following reasons. Not only has the U.S. stock market been highly correlated with the Chinese currency in recent years in general and over the past year in particular, but also the weakening of the renminbi signifies such fundamental concerns as a drag on growth for China’s competitors, the potential for building challenges within the China economy, and the potentially destabilizing capital flight out of China, to name a few.

When the weakening of the renminbi gets underway, it has been the S&P 500 Index catching up to the downside in recent episodes.

7. Commodities Markets Are Weakening Once More

Oil prices…have been stealing the spotlight in the commodities market over the past few months. Such attention is certainly understandable as the near doubling in oil prices since its mid-February lows has been impressive but signs are increasingly building that this oil price…rally is running out of gas. Not only is this problematic for the U.S. stock market, but it also bodes ill for high-yield bonds…whose recently remarkable rally in the face of steadily deteriorating corporate credit quality conditions has been heavily supported by the rally in oil prices…. 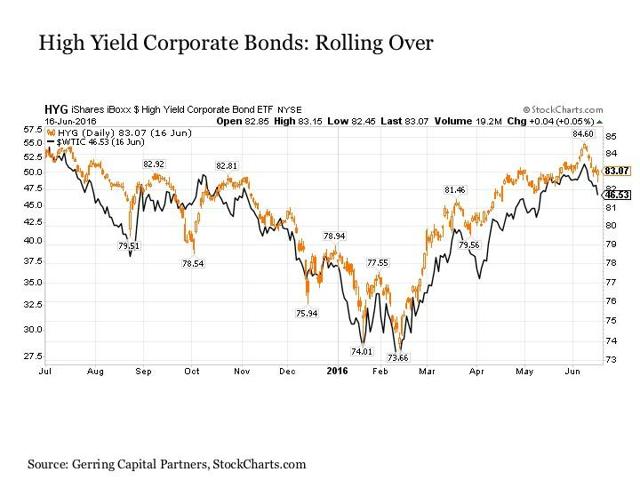 The fact that oil is rolling back over is not necessarily a surprise, however. Beyond still challenging supply and demand fundamentals in the oil space, other major commodities such as copper…had already fallen off the pace months ago and are in the process of pressing new lows to date. In short, the rest of the commodities space has been foreshadowing the exhaustion of the oil rally just as it foreshadowed the major correction in oil that began roughly two years ago now. 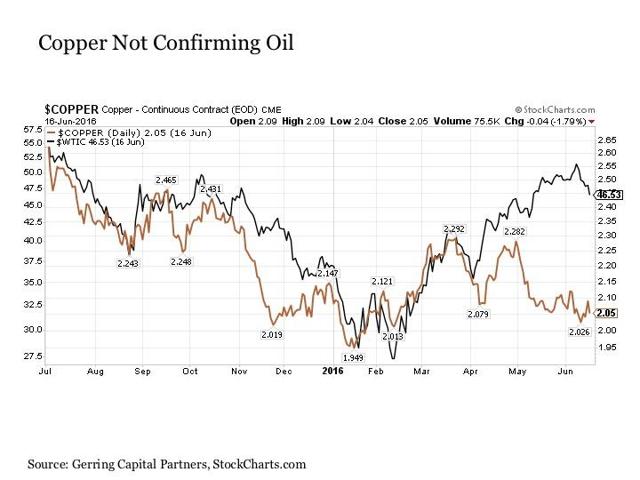 Just as the collapse of the housing market and the failure of Lehman Brothers resulted in negative spillover effects for the financial system back in 2008, so too have concerns…about the continued deterioration in the commodities market and its potential for negative spillover effects for the financial system today. To this point, leading commodities trading company Glencore…resided at the heart of the two sharp corrections that took place in July/August and September of 2015. While Glencore has taken aggressive steps to shore up its finances, it continues to fight in a challenging environment and is still worth monitoring in this regard. Moreover, Glencore is just one of a number of commodities traders that are currently navigating these difficult waters. 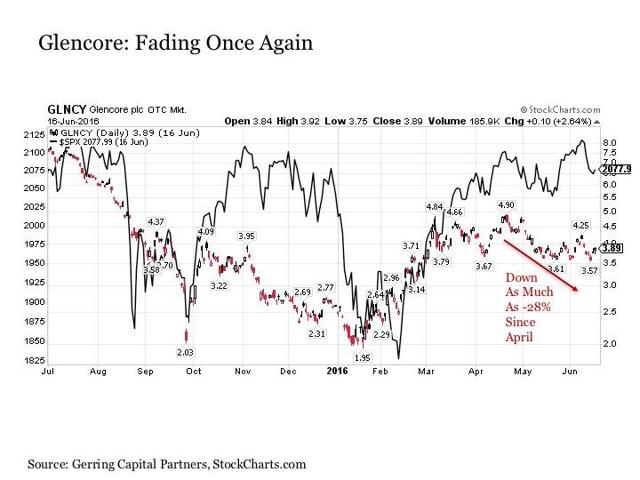 Since the stock market peak in mid-April, the S&P 500 Index has proceeded to continue pushing toward new all-time highs while shares of Glencore have fallen by as much as -28%. How much longer this divergence continues remains to be seen, but the fact that commodities prices continue to weaken and are threatening new lows in many instances, it appears less likely that Glencore is poised to catch up to the upside with the S&P 500 Index.

Speaking of negative spillover effects and financial instability, it seems a problem is increasingly brewing in the European banking system. Many of the leading banking institutions across the continent have been under fire for some time and two major banks in particular are raising eyebrows today for exactly how poorly they are performing today.

1. Deutsche Bank…, which is the largest banking institution in Germany…, is struggling to the point that it recently broke well below its financial crisis lows set in early 2009. 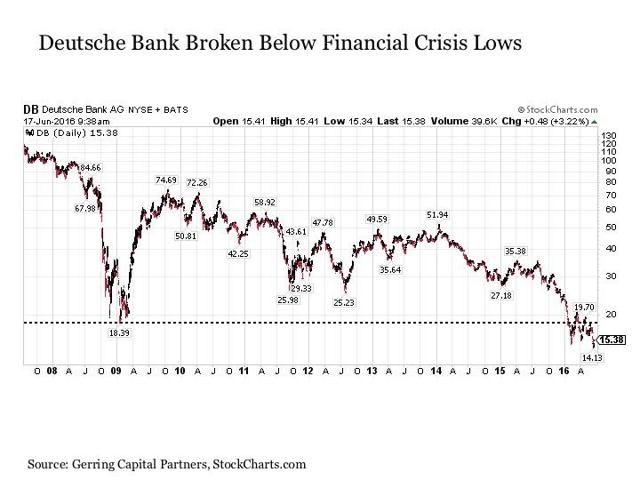 2. The same can be said for Credit Suisse…, which is one of the two major banking institutions in Switzerland…, as it also has cut decisively below its early 2009 lows. 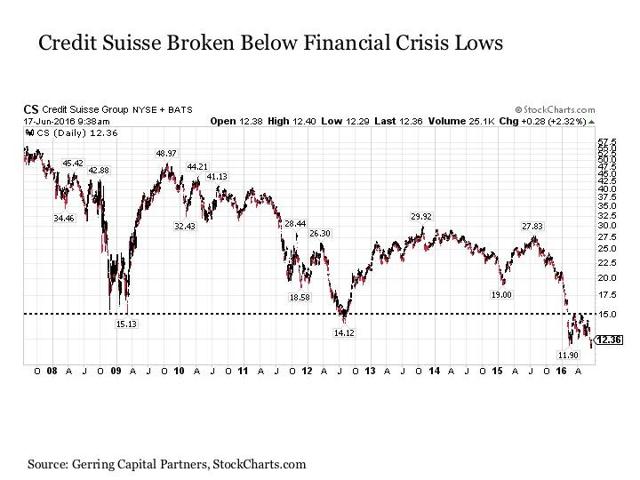 Unfortunately for the global financial system, while Deutsche Bank and Credit Suisse stand out for their weakness, they are not necessarily alone, as a parade of major banking institutions are lurking not far behind in working their way toward their respective early 2009 lows.

A problem is brewing in Europe. It was brewing before the potential for “Brexit” surfaced as a potentially real possibility and it has persisted despite the recent rally in oil prices…As we learned from the Lehman episode, once the banking system starts to break in one part of the world, it can spread quickly to the rest including the U.S. stock market that has defied all logic and reason to the upside to date.

The summer months have typically been a seasonally more difficult time for stocks. July into August in particular has seen some notably lousy stretches. In fact, one can go back through history and find measurable pullbacks that have taken place almost each and every year during this time period. For example, 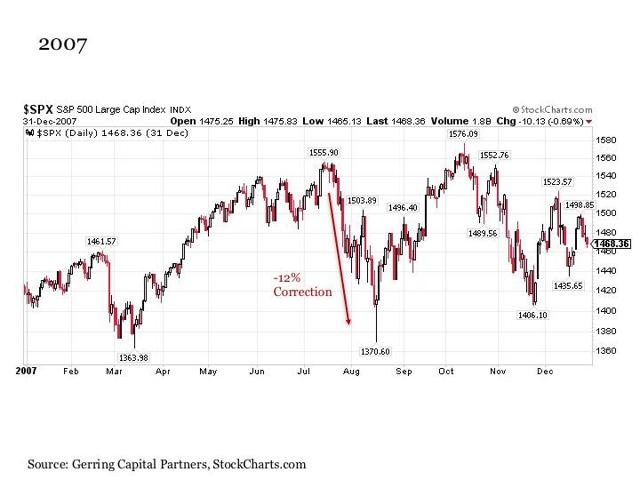 In short, it is highly probable that the summer is going to give stock investors at least some degree of downside volatility before the Labor Day holiday arrives. It is less a question of “if” as it is “how much.”

I have been bearish on stocks for some time but I’m becoming increasingly wild on my bearish prospects for stocks as we enter the summer months. This does not mean that I’m abandoning the asset class altogether, however.

…With [the above] said, when it comes to the broad U.S. stock market as measured by the S&P 500 Index, which makes up the vast majority of U.S. stock market capitalization and a sizeable chunk of the entire world’s market cap, I’m becoming increasingly pessimistic that we could see a meaningful downside episode that’s potentially sustained before the leaves are turning brown on the trees in the fall. As a result, I’m focusing instead on those areas of capital markets outside of stocks that have the potential to perform well regardless of how the S&P 500 fares in the coming months.

It promises to be an interesting summer to be sure.

Disclosure: The above article was edited ([ ]) and abridged (…) by the editorial team at